EDEN eliminates the confusion of energy use reduction by dividing your home into individual appliances. EDEN delivers personalised feedback that gives users insight into how they use their appliances, and the most impactful ways for them improve their habits.

EDEN's overall purpose is to help drive Australia's energy grid towards renewable power by reducing and levelling the energy network load. Many efficient appliances already help us do this at home, but not many solutions exist to help us use our appliances more efficiently. The biggest issue with reducing home energy consumption is knowing where to start, and what to do. I was frustrated with the infrequent surface level feedback from my energy bill, and was disappointed by the lack of actionable feedback in existing home energy tracking technology. That frustration inevitably transformed into an exploration of how best to provide that information to people curious about their energy usage, and ultimately into EDEN. 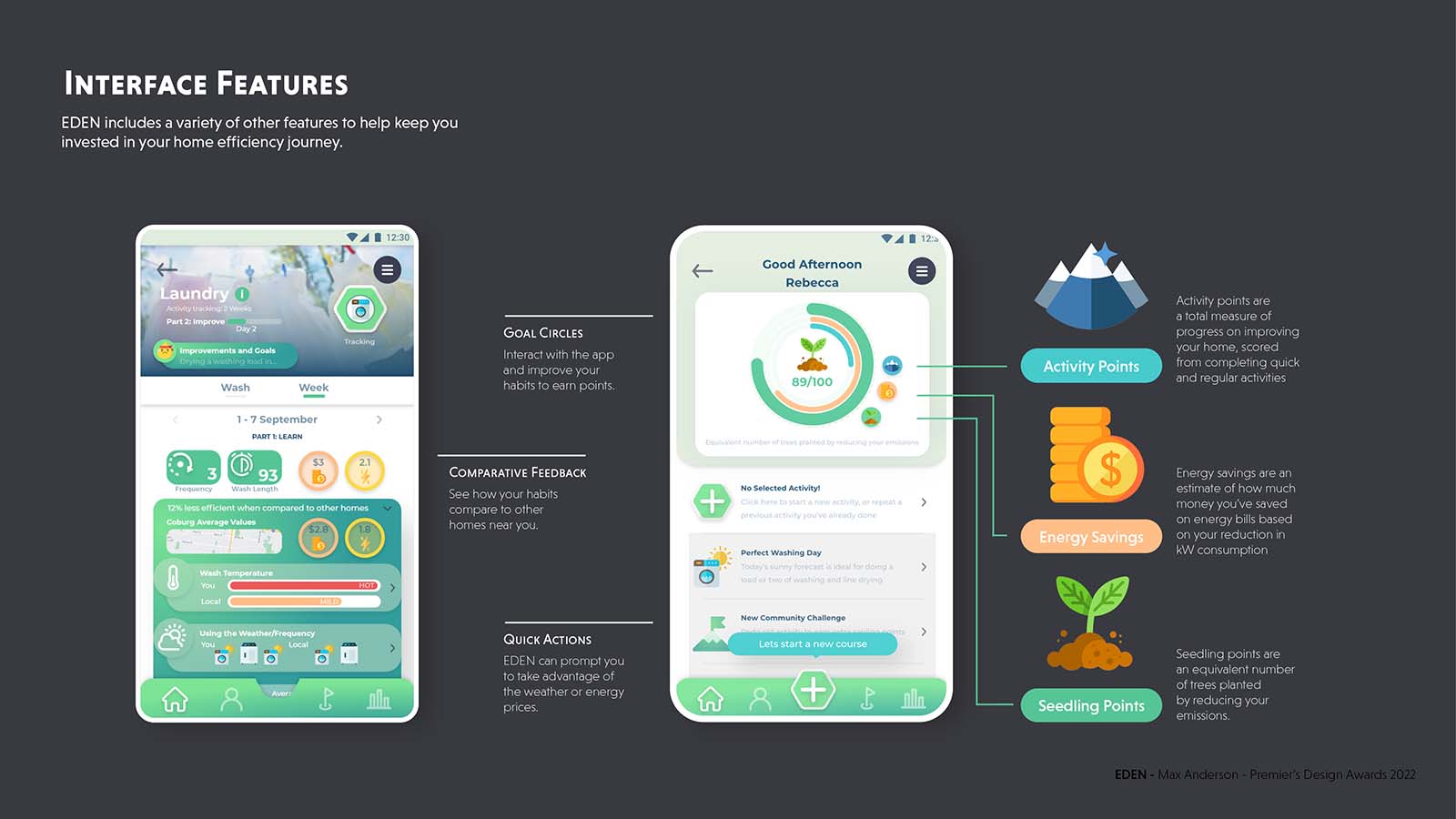 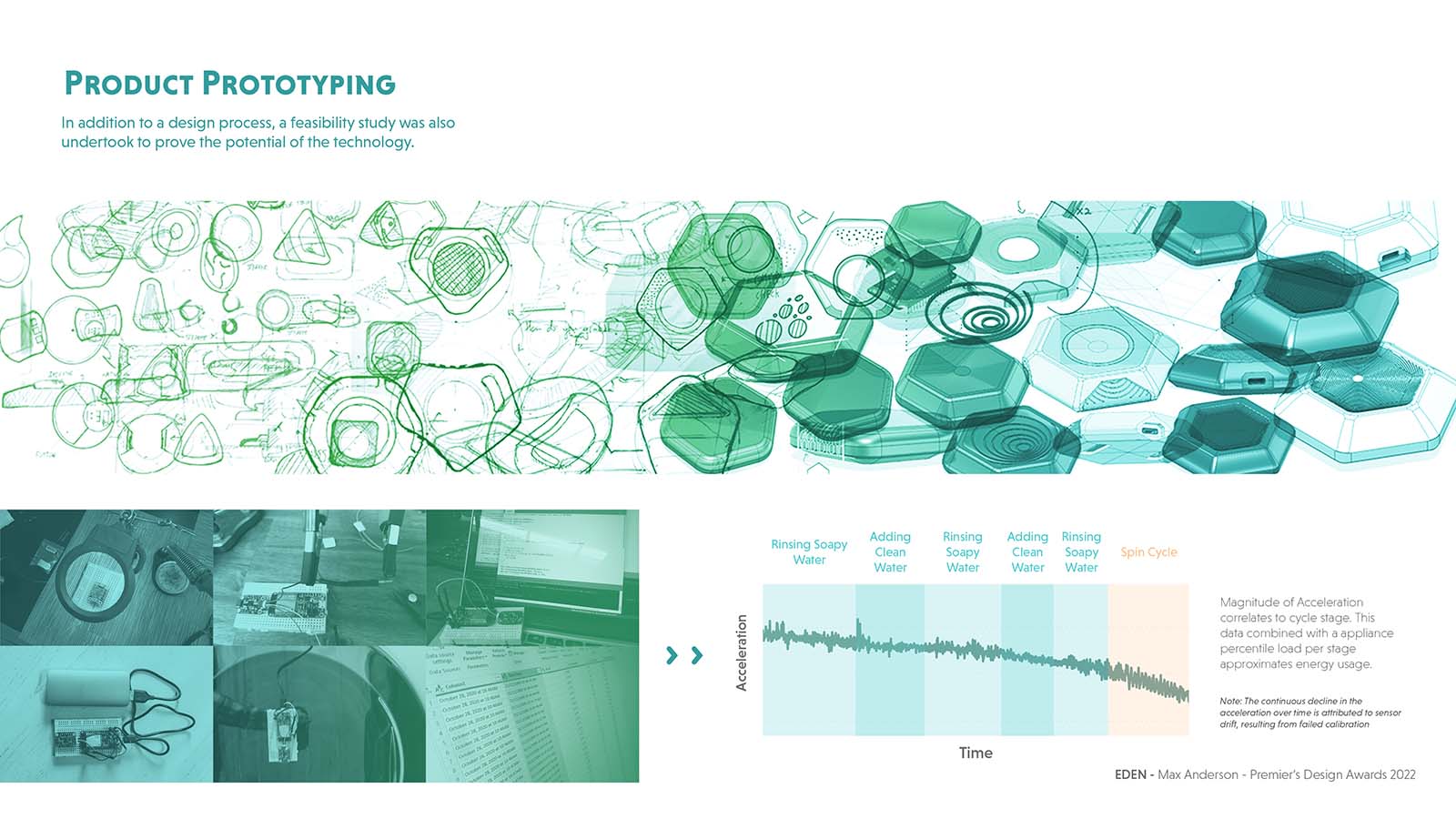 The design process started with understanding where the current problems are in motivating energy use change. Through user mapping, it was found that our current system incentivizes a gradual increase in energy usage through "content high energy households" driving up the energy averages other households comparatively use to determine their efficiency. The literature review found that the best energy usage feedback was specific, consistent and easily understood; all things the common energy bill fails at. This directed development of the UX to be around breaking down household energy usage into appliances, and short burst monitoring sprees. Short term monitoring was a similar technique essential to sports apps, becoming a key inspiration for creating familiar design language in the app.

As I was testing energy monitoring methods to connect into the app, I found myself getting frustrated by having to go behind appliances to connect and then disconnect smart plugs. I kept coming back to the idea of an energy stethoscope, a product that could be used to listen to the appliance to understand it.

Ultimately I tested using vibration to determine the stages of a washing machine, and saw promise. Having completed this project during the pandemic, I was restricted by the number of people I was able to showcase iterative prototypes to for feedback. However, I worked collaboratively with a graduate UX designer, and used the shareable digital prototype I was developing to run weekly testing sessions with friends and family. Testing included both observational and questionnaire studies to inform changes to the language, user process and visual hierarchy of the prototype.

The scale and quality of the project exceeded the original design brief by delivering extra design outcomes (the working sensor unit), and user feedback to the final prototype especially noting the level of realistic polish on display.

The underlying user experience of EDEN is heavily rooted in a wealth of relevant research. Many studies have been undertaken on how best to motivate more efficient energy behaviour in households, and present findings on which techniques have the greatest effect. How best to combine these techniques was one of the fundamental challenges of EDEN's design, and more importantly, how to ensure a positive user relationship with the platform. How do you design an app that works both for the energy "super saver", and the energy curious.

Designing the user experience was approached from the perspective of multiple different personas, provided varying layers of optional extra detail if users were interested. Otherwise, EDEN focuses on providing a smooth, condensed and cohesive experience that quickly communicates its complex process and the value it provides.

EDEN is the first platform of its kind. Existing methods of energy monitoring such as smart meters or smart plugs are great at showing specific consumption, but fail at understanding or informing users of how best to use this data to better their habits. Providing users with specific feedback about their household habits, and doing so over a short time period is key in sustaining interest and driving change.

Helping users find their own specific ways to live more efficiently and feel good about it is at the core of EDEN's design. By focusing on a single appliance for 2 week, EDEN is not only able to reward you for your good habits, but recommend areas of improvement and validate your efforts to improve. Compared to the regular quarterly energy bill, EDEN gives households the tools they need to start making sense of their energy expenditure right now, and does so cheaply through the use of simple sensors and wireless product/app communication. Utilising motion to measure appliance usage was a necessary ground-breaking discovery to allowing everyone to access the positive benefits of the platform.

Making small energy behaviour changes around our home can lead to individual energy savings, but does little to stem climate change. However, if many homes are equally making small changes, the impact of these individual small changes evolves into a sizeable decrease in energy usage, and energy spikes.

EDEN is all about using less and taking advantage of renewable resources, core fundamentals of bringing about positive environmental change. It helps people to become energy LEAN, and feel proud doing it. As it stands, EDEN is a well polished prototype, but it has the potential to bring communities together on making a small difference on a big scale.