The Service Victoria Check-In feature was instrumental in reducing the spread of COVID-19, assisting Victoria to safely emerge from lockdown.

The Service Victoria app was Australia’s most downloaded app in 2021. Just about every Victorian has used the check-in function. At a time when it was most needed, Service Victoria and Two Bulls created a scalable, secure and reliable check-in solution that played a crucial part in Victoria’s contact tracing during the height of the COVID-19 pandemic. At its peak, the app registered up to 8.1 million check-ins a day. With a firm place in the hands of all Victorians, the Service Victoria app continues to evolve, making it quick and easy to get things done with the government.

The mission was to use the existing Service Victoria app to provide a location check-in system to help minimise the transmission of COVID-19. The system needed to be secure, easy to use and accessible to all Victorians. Encrypted check-in data would be stored in a secure register and accessed by contact tracers if a location became an exposure site. The solution needed to leverage existing technology, be launchable to the public as soon as possible, and have accessibility standards to cater for all segments of the population; age, ethnic diversity, and technological literacy. The outcome should be scalable and responsive to rapidly changing circumstances and policies eg. restrictions (border closures) and preventative measures (vaccinations). 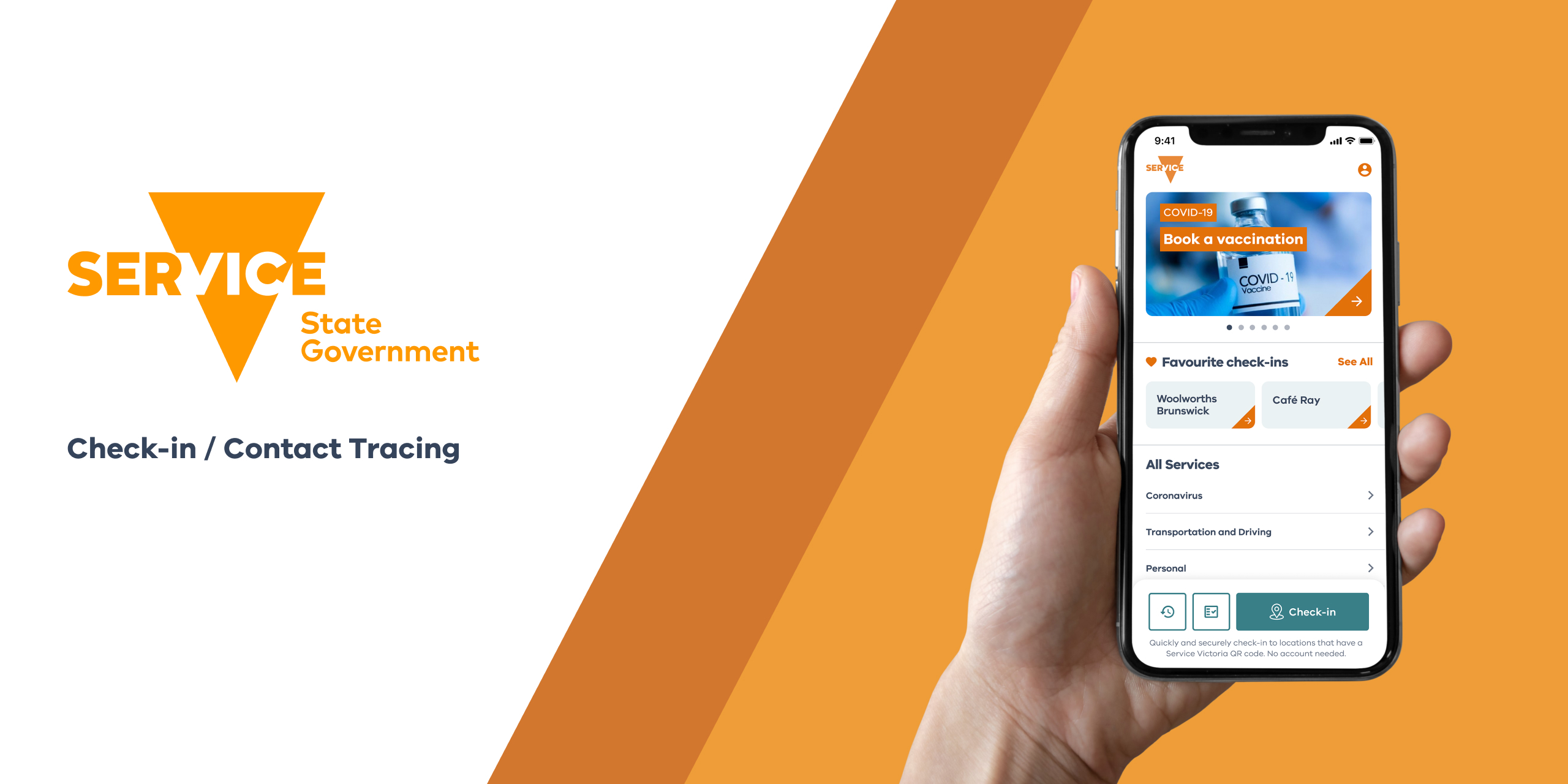 With “check-in / contact tracing” being broadly aligned as the desired solution for the most imminent challenge; the definition of locations and exact personal information that would be required by people checking in was reached through a series of cross-departmental discovery workshops.

Concurrently, determining how to create an experience for people to provide this data was a collaborative process between Two Bulls, Service Victoria and other senior stakeholders within the government. During the ideation phase, rapid prototyping and usability testing were conducted as a means of concepting and integrating new insights and requirements as they were uncovered. Through a process of divergent and convergent design thinking exercises, the solution of QR code scanning was chosen as the best mechanism for check-in and contact tracing.

Some exercises used to arrive at this decision were a cost/effort / feasibility matrix (with a particular focus on limiting the technological barrier) and a competitor analysis - researching similar solutions, pulling from their strengths and improving on their weaknesses throughout our design process. With the architecture of the solution defined, high-fidelity user flows were designed, tested and circulated upwards through a chain of approval gates. The most viable version of Check-in was developed and quality assurance tested on both iOS and Android platforms concurrently to ensure a timely release.

After the initial release, the team set to work to further enhance the solution with other features. Some features had already been discovered throughout the first production phase, while others were gathered from public feedback through Apple App Store and Google Play reviews. Together these insights laid the foundation for enhancements for subsequent builds.

The co-design discovery and concepting in the early ideation stages fostered inclusive participation to provide a voice to all stakeholders and experts from various disciplines. This ultimately led to a solution that was concepted, built and released in an extremely tight timeline of about six weeks. Platform Agnostic Design Utilizing a platform agnostic user interface design system meant we could lean on the most familiar and recognizable interface paradigms for both iOS and Android, without the overhead of designing and maintaining artifacts for both platforms.

An important part of the design and development process is the cycle of Build > Test > Learn > Iterate. After collating experiences and reviews from the public, we designed and delivered multiple iterations to the check-in experience to make it more well adapted and efficient to real user behavior, including:

While QR codes are not a new technology, the use of Apple’s “App Clip” and Android’s “Instant Apps” for contact tracing check-in was a novel innovation and the first time used this way by the government in Australia. This meant the solution could leverage the advantages of native mobile applications without requiring a user to actually download a full app bundle or even visit the app store. Thus, user features such as saving contact information (or their dependants’) locally on their own device for auto-filling check-in details became possible (an often noted pain point on privatized solutions). The size of the app clip / instant app bundles was comparatively tiny, which reduced the barrier of use for people with very old devices with limited memory.

The Service Victoria app was the most downloaded app in Australia in 2021. At its peak, it registered up to 8.1 million check-ins a day and more than 6 million digital vax certificates have been added to the app. The check-in function helped curb the spread of coronavirus as a real-time tool for contact tracers to notify people if they’d been at an exposure site. This helped Victorians manage their COVID-19 exposure risk which reduced infection numbers and the pressure on health services. Additionally, it provided a standardised solution and eased the administrative burden of individual companies requiring an otherwise manual or privatised process for contact tracing. Another milestone was the integration of the vaccine certificates.

The ability to display them in the app helped Victorian businesses reopen their doors faster, an important part of the State’s economic recovery. Furthermore, it provided everyday people with the security and reassurance that Victoria was taking all measures possible to halt the spread of coronavirus during the most critical period of the pandemic The check-in function put the Service Victoria app in millions of Victorian's pockets and handbags, cementing its reputation as the one place to quickly and easily get things done with the government. Customers can get to more than 80 online services through Service Victoria and have completed more than a billion transactions including QR code check-ins, car registration payments, ambulance subscriptions, vouchers and cashback to help reduce the cost of living, and more.