The Iron App is designed to help Australian soldiers be as mentally fit as they are physically fit.

The Iron App is a gamified health app for Australian warfighters aimed at helping soldiers be as mentally fit as they are physically fit. It uses performance optimization as a vehicle to validate mental health practices and nurture a positive change in culture around mental health in the military.

Australian soldiers undertake roles that are physically, psychologically, and socially demanding. For this reason, the Australian Defence Force (ADF) population is specifically recruited and trained to be tough, resilient and perseverant in the face of adversity. Nonetheless, the prevalence of mental ill-health in the military context is an enduring problem in Australia and worldwide.

As a response, the government has made many mental health and wellbeing services available to serving and ex-serving ADF members. However, these resources are being underutilized. Among many reasons, this is due to normative social influences such as stigma and gender (significantly masculinity). This project sees the opportunity in understanding these social phenomena to create a design intervention that appeals to the soldier identity. It is aimed at bridging the gap between physical and mental health in the military by leveraging human performance optimization as a way to relate to the masculinity that dominates the military. 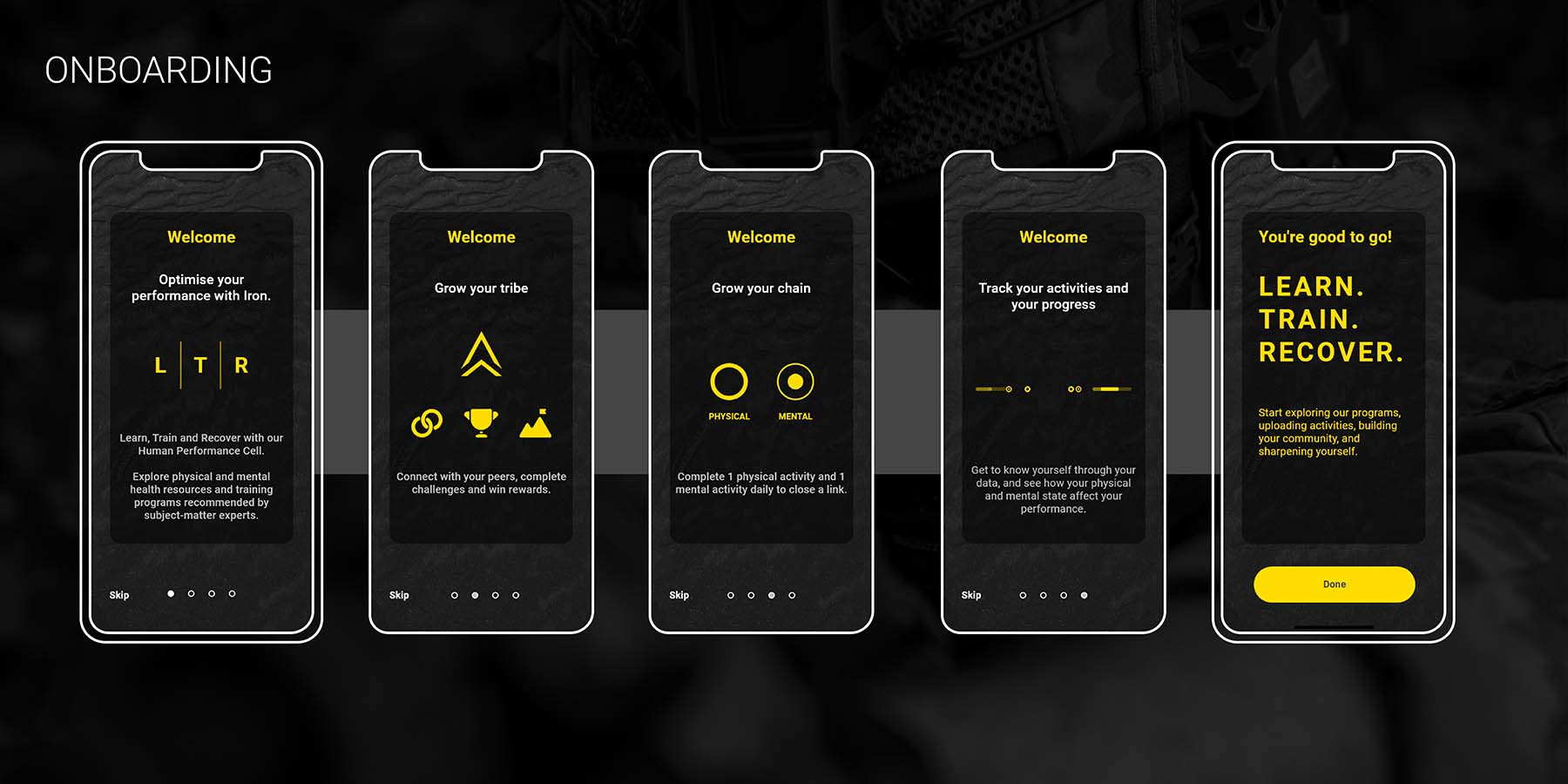 The design model followed by this project is best represented as the double-diamond model for design thinking informed by two design frameworks: Social Implication Design (social change through artefacts, driven by understanding the natural social phenomenon affecting the social problem and understanding the subsequent contributing behaviors) and Design for Wellbeing (links social practice theory with wellbeing and bridges the gap between abstract experiential design objectives with specific products and interactions). Combining these frameworks influenced critical thought so that a positive social and psychological impact could be realised through the design outcome.

Following this framework, the project began with heavy research into the social context in the military and the perceptions that contribute to barriers to mental health care. Desktop ethnographic research, surveys and interviews were conducted to gain a deeper understanding of the users, their needs and their social context. It was after an iterative synthesis of facts and ideas that the design challenge and proposition were formulated.

Precedent examples of positive design practices and outcomes were used to influence the pathways that were pursued for the project: the gamification of health and quantified self. Sketches, system maps, storyboards, and wireframes and prototypes were then presented to potential users in interviews and focus groups. These methods followed an iterative process of ideation, prototyping and testing which helped validate the usability, function and value of the final design outcome: the Iron App.

The quality of this design project was allowed by an iterative design process which involved critical thought, and user and stakeholder input at every stage of the design process. As a result, the app can offer users a meaningful experience that validates mental health and wellbeing practices with relevance to the military. To achieve this objective, the project:

The Iron App sets a benchmark for social implication design and design for wellbeing through digital technology. Every element of the Iron App was created through a nonlinear and iterative design process, carefully crafted not only to facilitate a positive experience between the user and the interface, but also to foster positive relationships between users and nurture a positive social impact in the military community.

The Iron App is designed specifically for the Australian warfighter. It is aimed at building users’ intrinsic motivation to care for their mental health by aligning it with care for physical health – all under the umbrella of performance optimization as a warfighter. This is based on the intention of recognising the significant role that gender plays in the military identity, and to fit the design outcome into the existing male ontology in the military. By normalizing and validating mental health practices and empowering users with resources to build their self-awareness and improve their overall wellbeing, the Iron App can help nurture a positive change in culture towards mental health and wellbeing in the military. Existing mental health and wellbeing resources specific to the military lack in the application of user-centered design and are therefore not engaging for the users.

The Iron App offers a user-friendly, visually aesthetic, and gamified platform that helps soldiers to connect with their peers, set goals and track their progress in terms of mental and physical health. It is incremental innovation based on existing military resources and health apps that are already known and recognizable to users. Hence, the Iron App is familiar to users, but it is also streamlined and includes potentially life-saving resources that can help soldiers optimize their performance.

This design project back casts from a future of a flourishing Defence Force and responds to the Royal Commission into Defence and Veteran Suicide. It is aimed at promoting wellbeing, preventing mental ill-health and alleviating the economic stress from mental illness. With continuous stakeholder and user engagement, this design project can maintain its significance and help create a more sustainable fighting force.

The Iron App uses the gamification of health and the quantified self to create meaningful and impactful user experience that boosts their intrinsic motivation to care for their wellbeing. This project is aimed at fostering more discussions around mental health and wellbeing in the military community, and for users to inherently include mental health practices in their daily routine. Through interacting with the app and the resulting behavioural side effects, the aim of the app is to achieve the social implication of reducing the stigma around mental health in the military context and the users’ avoidance of seeking help.

The project also aims to stimulate human flourishing and improve users’ eudaimonic wellbeing as it is defined in the military context. This project creates opportunities for users to flourish by improving their external conditions and personal resources and hence, contributing to optimal human functioning. It allows users to experience positive affect (through positive reinforcement and awards), pursue their personal goals (through progress tracking and goal setting) and be a morally good person (through access to educational resources and decision exercises).

This project highlights the value in good design when tackling wicked problems. The resources being used in this app are already collated by military human performance optimization experts but are poorly delivered with no professional design involvement. Hence, this project also highlights the value of investing in the professional design process by government organisations, especially the Australian Defence Force.