A digital artist and composer collaborate to produce a large-scale immersive digital experience at the Melbourne Recital Centre.

The creative brief was the result of the artists responding to a Melbourne Music Week expression of interest for events by performance artists. Our outcome was to design and produce an immersive audio visual experience bespoke for the Melbourne Recital Centre, that premiered music from Howard's upcoming album release 'All of Us'. Conceptually we were concerned with creating a cohesive, performative audio visual dialogue between Howard's musical performance and Burgin's digital art.

Developing a solution that would allow the artists to perform and seamlessly bring their disciplines together to transform and re-imagine the performance space. Site specific, our project considered the architecture and wood paneled design detail of the Elisabeth Murdoch Hall originally designed by ARM architecture as part of this brief. 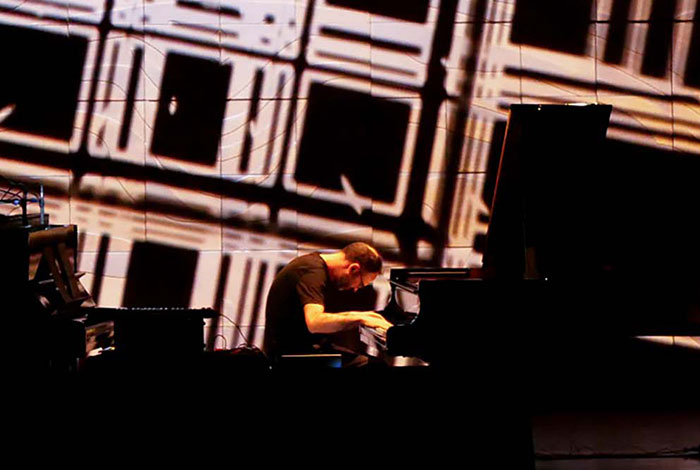 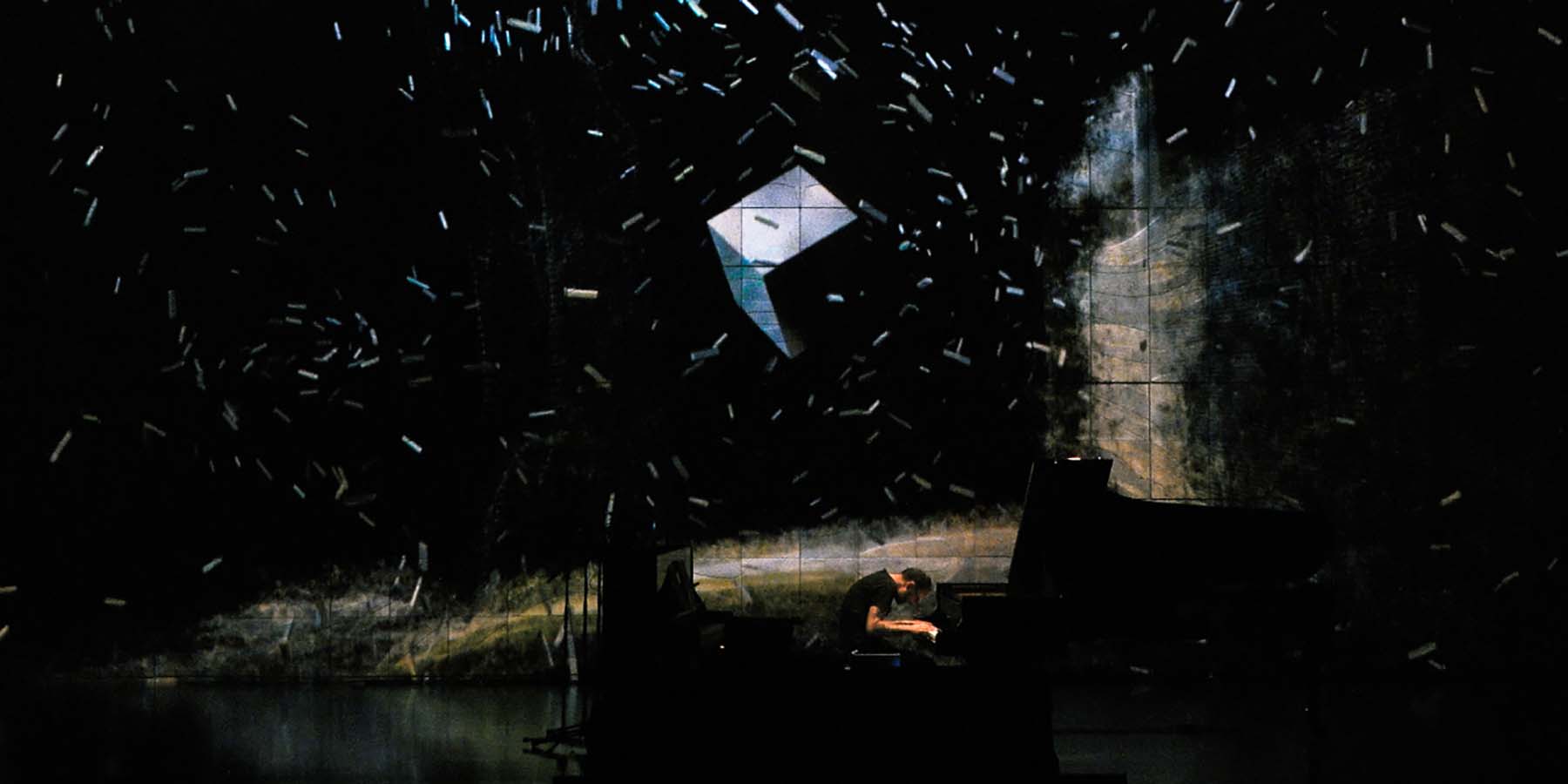 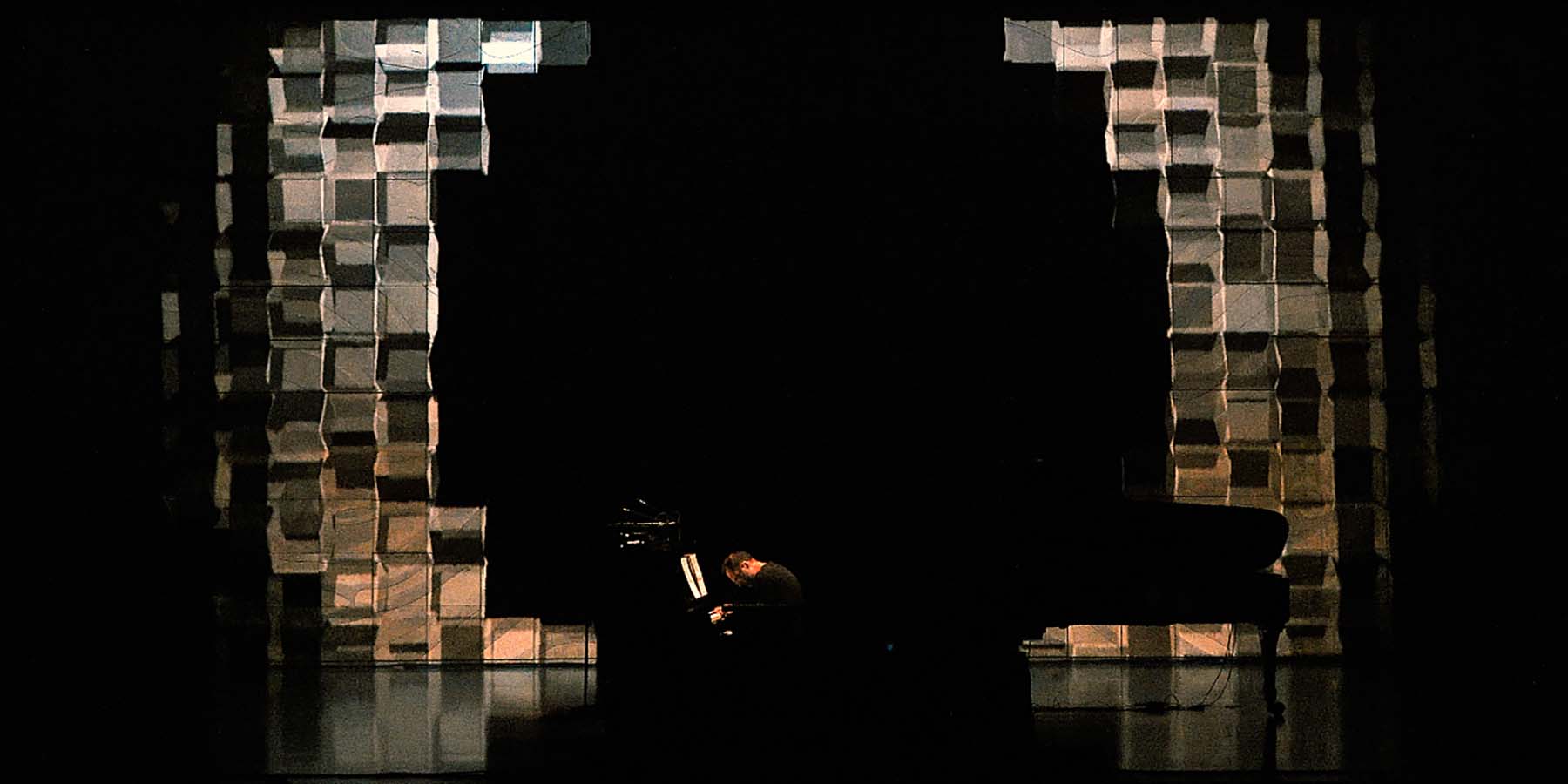 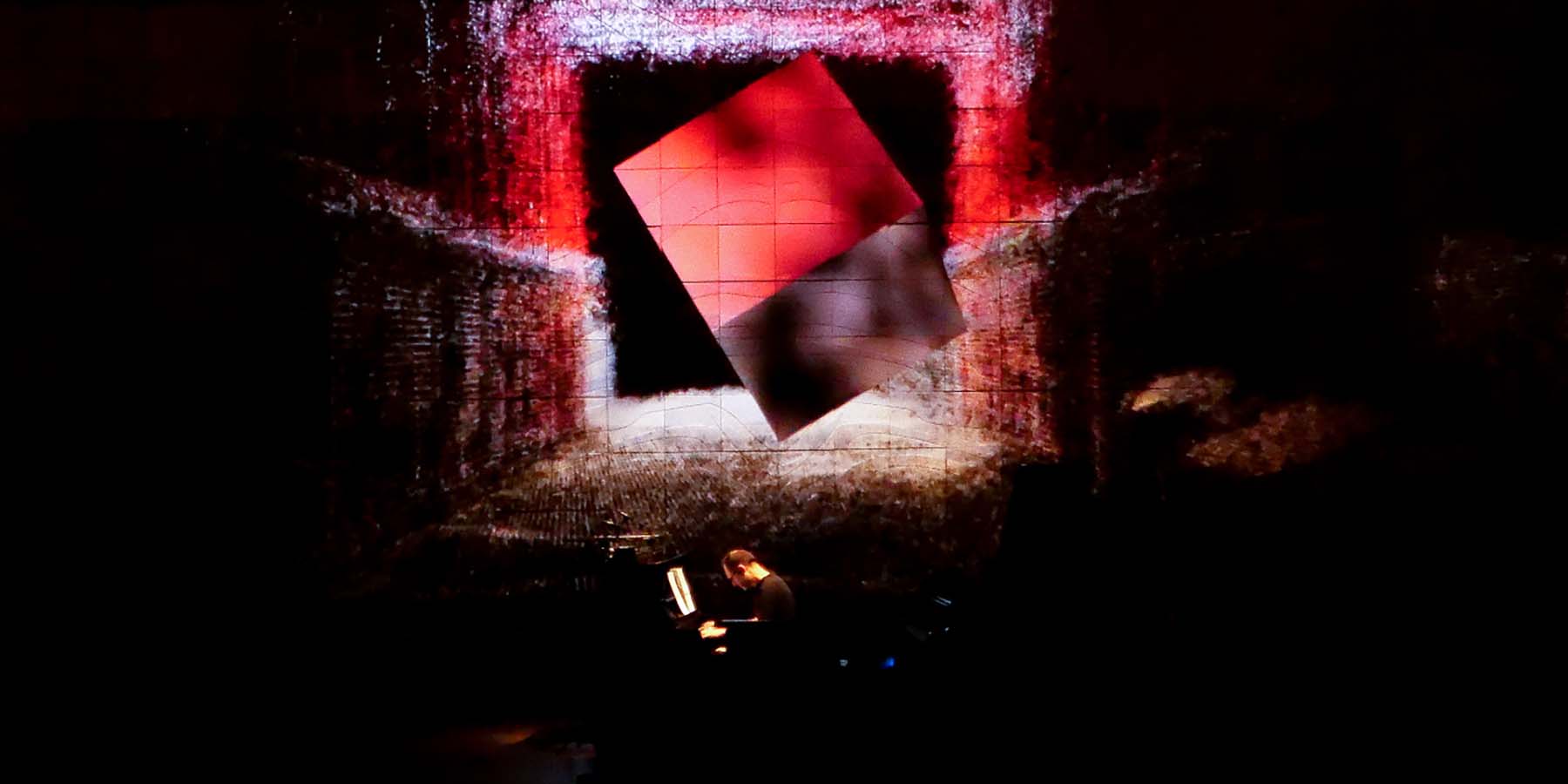 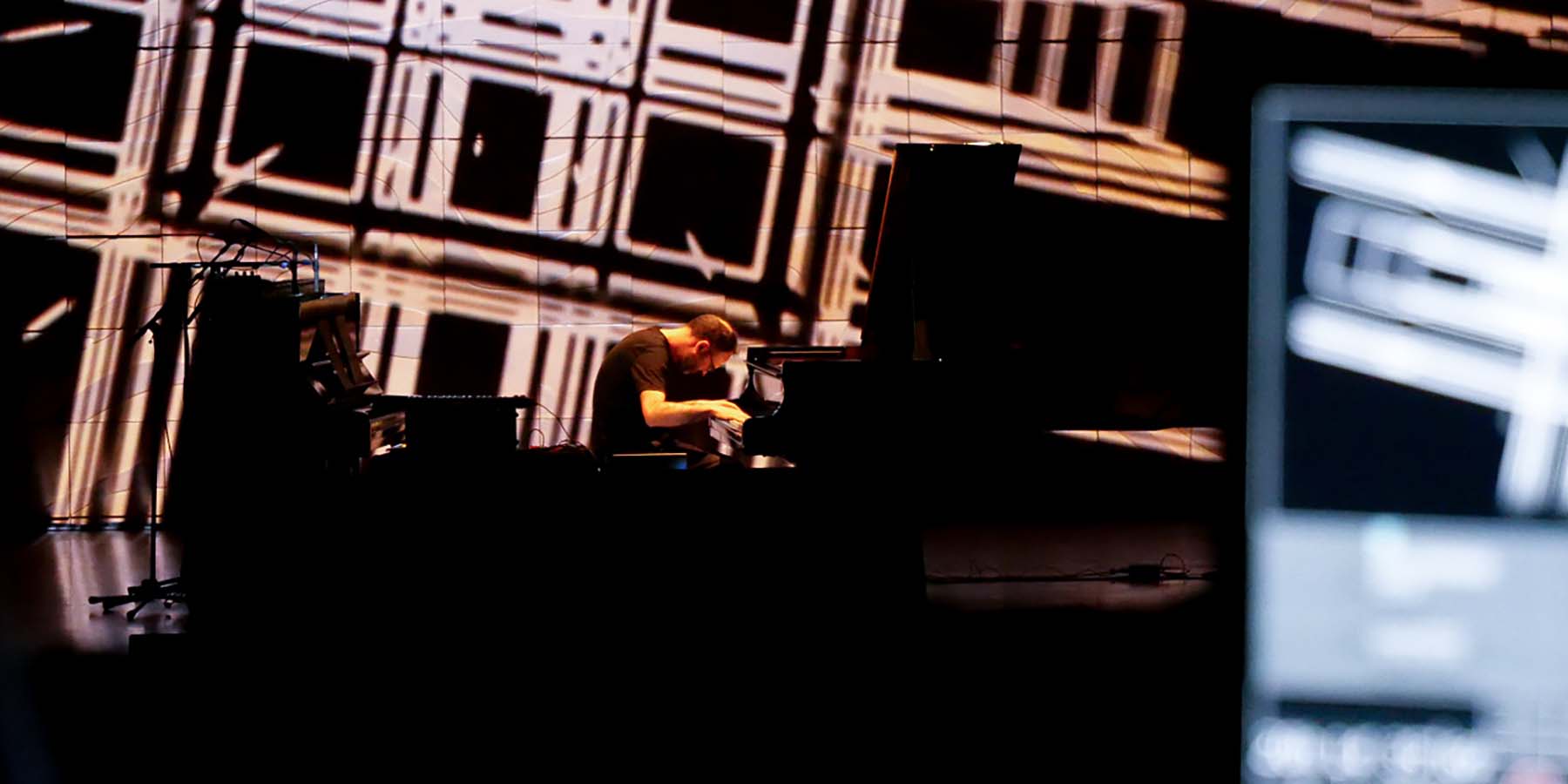 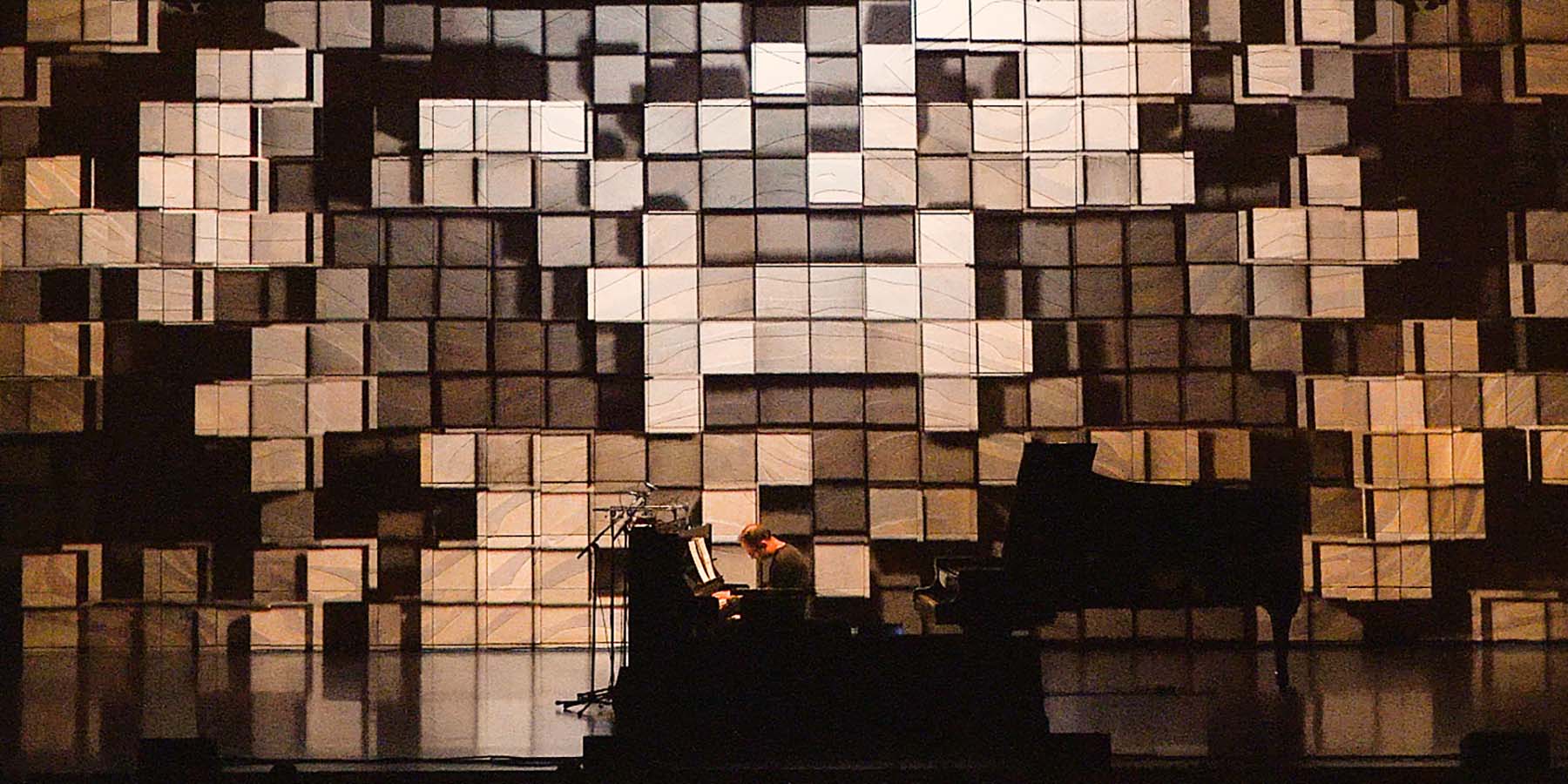 Whilst working alongside Melbourne Music Week and the Melbourne Recital Centre, the artists devised their own design process and production schedule. Firstly we considered the overall audience experience we wished to produce. After devising an initial set-list, a thematic visual structure was sketched that considered the arc of the journey we wished to convey within the parameters of a seventy minute set. After a site visit to conduct projection and technical tests, we outlined an approach that would allow a dialogue between stage performer, digital artist and the projection mapped outcome. These were our blueprints moving forward.

Once in production. Burgin focused on developing an digital art response to Howard's compositions, beginning with a central procedurally driven system that considered the Elisabeth Murdoch Hall's iconic cubic stage facade. When projection mapped and aligned with the architecture, this animated design would produce the illusion of 3D depth and shadows, acting as a reoccurring design motif throughout the show. Building on this, a complete suite of dynamic designs were developed, each with their own personality but sharing a unified sensibility.

To not detract from the warm hues of the architecture each design was monochromatic, except one. For a later track 'Critical Spirit' we reserved a special treatment, one that reset the audiences immediate expectations with 3D visualisations in rich expansive colour. Howard and Burgin work-shopped the experience and performance format together in the studio. We decided against a conventional format of audience rapport as well as the utilisation of extensive lighting effects. Instead we opted for a simplified approach with a single diminished spot, a continuous performance and almost complete visual emphasis on the projection. Subsequently Howard on stage was fully enveloped and integrated into the large-scale digital response.

This experience was designed to immerse the audience through a site specific response and performative dialogue between the music and visual art. To distinguish it from other shows and to break from convention, the artists developed a cohesive aesthetic that augmented the performance space as an fully immersive canvas. Significantly, our visual art did not consist of any pre-rendered animated content, yet was manifested entirely procedurally through a programmed system that were performed and spontaneously driven by the dynamics of the show.

This real-time integrated approach gave the effect of Howard on stage 'playing' the venue architecture as much as his instruments. The benchmark of these immersive effects is well evidenced in the documentation and subsequently a performance video from the show which is slated for upcoming official release. It's important to note we worked carefully within the resource limitations of our Music Week funding. We opted for a simplified technical approached that leveraged the existing venue resources and design.

Ultimately this technical approach proved successful and sustainable, especially in the respect it required no one-off built structures or additional materials beyond the facility and the artists equipment. Relying purely on the mediums of sound and projected light, our immersive experience simply celebrated the performance space, the music and the art.

Aligning with Melbourne Music Weeks 2021 creative program, our show intended to push boundaries and to challenge and redefine traditional audience expectations of classical performance. As a creative team our previous collaborations have been enabled by actively working with innovations in digital art development software, audio technology, large-format projection mapping and screen technology. This project followed that trajectory, whilst individually working on music composition and visual art production we came together in a series of collaborative sessions at Howard's studio in Brunswick. These exchanges allowed for technical experimentation and innovation, visual development as well as performance rehearsals.

The projects digital art component was custom programmed in Derivative TouchDesigner using the latest technological capabilities of this design and real-time animation platform. Whilst we explored MIDI and direct linking Howard's instruments with computer hardware, we eventually opted for a live audio feed from the sound desk to be run through programmed audio analysis to provide direct influence to the animated visual designs. Burgin also made use of a DMX slider controller that was custom programmed to provide influence and nuanced control over various procedural design elements throughout the experience. In this way we devised a tangible way for the digital art to be live performed, akin to one of the instruments on stage.

The immersive experience programmed as part of Melbourne Music Week was very well received, beyond artist expectations, the show nearly sold out the venue. We were offered fantastic feedback from Melbourne Music Week and from the Melbourne Recital Centre, their largest show in over a year.

The project showcased the talents of one of Australia's leading composers as well as the practice of an innovative artist working in the digital field, proving the tangible value of interdisciplinary practice. After the Covid related lock-downs of 2020 / 2021 and the consequential effect on live events, it offered an auspicious opportunity to premiere compositions from Howard's (then) unreleased thematic album 'All of Us'. We believe that by challenging the paradigm of classical performance and employing an innovative technical approach we reached and impacted a broader audience.

Our immersive approach effectively engaged with design and media art enthusiasts as well as music fans, expanding the artists and Music Week's audience base. As well this project has also proven instrumental in sustaining a creative collaboration that begun with an A/V performance at Dark Mofo in 2017 and is happily ongoing now.

Three Corners of the City

The Future of Personal Data Ownership

Triceratops: Fate of the Dinosaurs (Act 3)