The VPDA showcase was a multi modal exhibition and an enduring research archive celebrating twenty five years of design excellence.

The Victorian Premier’s Design Awards Showcase was a multi modal exhibition and includes an enduring research archive celebrating twenty five years of design excellence from Victoria. The exhibition at the RMIT Design Hub was a feature of Melbourne Design Week 2022 and included object display, commissioned documentary films, co-curated installations, award entries, a forty metre digital media projection and an augmented reality 'NEXT - Emerging designers AR Showcase' immersive digital experience. The themes driving this showcase were: THEN | WHO | HOW | NOW | NEXT. The exhibition features a circle motif and watermark logo inspired by the architecture of the RMIT Design Hub.

The design brief included the curatorial research of the history and significance of the awards, identification of emerging design talent, a commission of five documentary films and the design of the public exhibition at the RMIT Design Hub. The showcase was to celebrate Victorian Design and engage the community as both a venue for functions and also a major event during the 25th anniversary events program. Prior to this commission no historical archive documenting these significant awards was in existence. The curatorial research involved sourcing, collating and digitising data from individual awards catalogues on the entries, organisers, judges and prizes for the awards program. Sourcing this original material proved to be a unique challenge during COVID 19 lockdowns, with no access to publicly held records. The original brief did not include films however this was added at the request of the curator to enhance the enduring impact of the project. 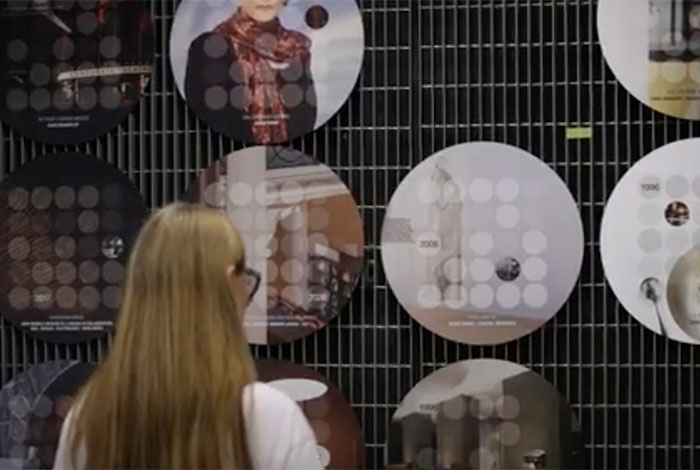 The exhibition design process began with the consideration of the unique gallery space in the award winning RMIT Design Hub designed by Sean Godsell. A commitment to sustainable design practice determined that the design should make use of the existing projection facilities and loaned display cases for object display. THEN | WHO | HOW | NOW | NEXT were adopted as themes.

A pixel/dot design theme was inspired by the circular elements that form the facade of the iconic RMIT Design Hub building and to recognise the 2006 Premier's Design Award - Design Mark presented to Sean Godsell. Film production included the design of motion graphics to highlight significant award entries and link the films to the overall theme. The 40 metre AV projection was developed with over 210 minutes of content and featured a tribute to the Queens Baton Relay, Holden Design, and the Keep Cup. These single image animations exploited the long narrow space and drew the viewer into a more immersive experience. These tributes came out of the research and emerged from a design process focussed on maximising the opportunity of the seven projectors.

The feature objects provided by Visnja Brdar, Georgia Chapman and Jenny Morgan were as a result of a co design process with these outstanding designers. A development of the watermark array of 5 x 5 dots referenced the twenty five years since the awards were established, and highlights the seventeen times the awards have been held. This elegant design solution assisted the audience to place the work being viewed in the correct historical timeline. The watermark featured on 178 digitally printed dots on the west wall in the space with the year the work was entered in order from 1996 to 2021. Dots were curated by color during installation and exceeded the impact envisaged in the design concept.

The work being celebrated in the showcase represented excellence so the goal at all times was to honour and deliver design excellence. The dot concept was deeply considered at all levels and across the multi modal delivery with passion and commitment to good design. Consideration of traffic flow, OHS and COVID rules, the challenge of a long narrow space, were all constraints that were incorporated by a team with experience and a commitment to good design. The many individual elements were integrated and each design execution was creative but consistent and design management ensured integrity of the visual theme of the pixel/dot and THEN | WHO | HOW |NOW | NEXT. Over one thousand images were created and incorporated into the films, audio visual projection, project dots, AR app and social media content.

Design innovation in this project is demonstrated in the creative use of the latest augmented reality tools to deliver the 'NEXT - Emerging designers AR Showcase'. Chosen as the delivery platform for our emerging design talent the immersive user experience was engaging and popular with visitors. The app can be explored as part of the enduring archive for this project. Design innovation also is demonstrated by the creative deployment of a digital only execution that delivered a sustainable exhibition for Design Week 2022. The watermark dot array design solution delivered a user centred navigation of the data for 178 projects across 25 years. This intuitive design solution was simple and effective.

The enduring research record that evolved from this project will have an impact for design education and Australian society for many years to come. In particular the films offer insight into design process, manufacturing in Australia, and the careers and design education of some of our most awarded designers. This commission adds significantly to a broader body of work on design in Australia. The exhibition was featured in National media and the video produced by Creative Victoria during design week was widely shared on social media and features on the home page of the Victorian Premier's Design Awards.

Triceratops: Fate of the Dinosaurs

A Friend of Mine / Great Wrap