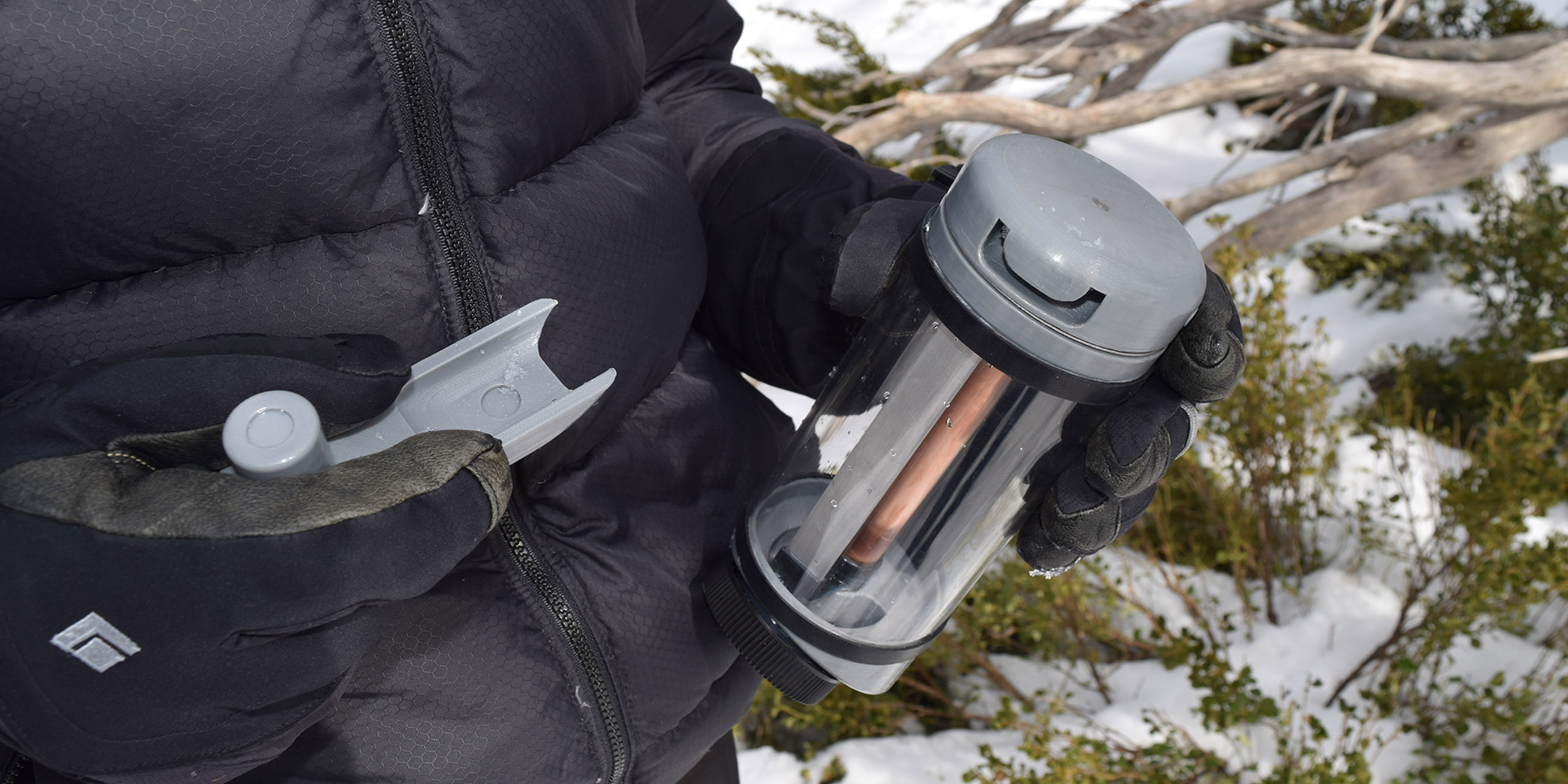 H2 Snow is an alpine survival tool that converts snow into drinking water through human power. When users operate H2 Snow by turning its handle they activate a uniquely designed mechanism which creates heat through friction.

H2 Snow is unique because unlike other solutions it does not rely on finite resources (gas stoves, electricity, sunlight, etc.) to melt snow water. In survival applications, H2 Snow's functionality has potentially life saving implications.

A few years ago a friend broke his leg skiing backcountry and was stranded in the Victorian High Country for two nights without water. Snow shouldn’t be consumed without melting it; eating snow promotes dehydration and hypothermia.

Adventurers carry minimal water, relying on gas stoves or sunlight to melt snow. In a survival context, gas depletes and the sun disappears, meaning adventurers lack guaranteed access to water. Above all else, adventurers need reliable products. So why are they using finite resources to obtain water?

This led to the design brief - design a drink bottle for backcountry adventurers that can melt snow into water without the traditional reliance on finite resources (gas stoves, electricity, sunlight, etc.). The project began by identifying human input as the most viable way to generate heat energy without finite resources. Early prototypes focused on what this human input could look like; turning a generator to make heat through electricity, using a bicycle pump to create heat through friction - even harvesting heat from urine was considered. Ultimately it was friction that had the most potential, so efforts were directed at making a mechanism to effectively harness this heat generation technique.

These prototypes were made from an assortment of plumbing supplies, household objects, and retrofitted drink bottles. Their input motion progressed from pumping action to smooth rotation as ergonomics came into play.

With rotating silicone fins in a copper tube showing promise for heat generation, testing identified a rotating blade was needed to pulverise snow as it was heated. 3D printing was used to create custom seals and linkages for this part. Issues with getting snow into this prototype identified the need for a detachable scoop.

To avoid adding extra components, the crank handle was redesigned to double as a scoop, detachable via magnets. After consultations with stakeholders and intensive workshop testing, prototypes were taken into the Victorian High Country (during winter) for final validation.

Through combining the insights gained in the design process, a high quality (largely 3D printed) final prototype was produced. This final prototype demonstrates design excellence as it fulfils the original design brief - to create a product capable of melting snow into water without a reliance on finite resources.

H2 Snow is a one litre drink bottle with unlimited snow melting capacity. To negate reliance on traditional finite resources used to melt snow, the product is operated by hand and features a unique rotational mechanism which produces heat via friction.

The operation of this mechanism has been highly considered from an ergonomic perspective. Designing the product to be operated via rotation of a handle ensures maximum human energy transfer to the heat generation mechanism with the least amount of strain on the arm.

Furthermore, H2 Snow users will typically be wearing thick gloves whilst operating the product. An additional design feature was the optimisation of the product’s form (including the shape of the scoop and and inclusion of rubber grip points) to ensure easy operation even when dexterity is limited.

Excellence is also visible in the design of the scoop which doubles as a detachable handle (used to operate the heat generating mechanism). The inclusion of a scoop makes it exponentially easier to fill the bottle with snow, especially when users are wearing thick gloves.

The multifunctional nature of this component saves material and reduces design complexity. Furthermore, the ability to dock the scoop securely within the product makes traveling with and storing H2 Snow less of a hassle.

An extensive literature review revealed that there is currently nothing on the market that is even remotely similar to H2 Snow. No product exists that can melt snow without finite resources. In fact, no product currently exists that has the explicit function of melting snow for drinking water.

Adventurers currently melt snow through solutions that are either crude DIY attempts (leaving a black tarp in the sun with snow on it, filling a ziplock bag with snow and putting it one clothing layer away from the body) or use products that are not purpose built (setting up a gas camp stove, melting snow, transferring it into a bottle).

H2 Snow is the world's first purpose built snow melting tool that operates without a reliance on finite resources. Where the sun can disappear for days and fuel sources deplete, H2 Snow is a simple solution that works again and again.

Unlike other products which rely on finite resources to melt snow, H2 Snow boasts unlimited melting capabilities. In survival contexts this has potential life-saving implications.

At a conceptual level, H2 Snow offers positive environmental impact as it doesn’t default to fossil fuels to fulfil its purpose (currently available products use fossil fuel derived substances to produce heat to melt snow). The project exists not only as a survival tool, but as an exploration of how we can shift our thinking to harness novel and more sustainable resources into the future.

At a more functional level H2 Snow represents sustainability through its ability to be disassembled. Significant time in the design process was allocated to the 'design for disassembly' methodology to ensure the vast majority of its components are either serviceable, replaceable or recyclable.

The H2 Snow idea was born within the Victorian High Country but has use applications in alpine regions the world over. H2 Snow captures the spirit of adventure present in Victoria's High Country and is a truely unique embodiment of the State's creativity.

At a conceptual level, H2 Snow offers positive environmental impact as it doesn’t default to fossil fuels to fulfil its purpose (currently available products use fossil fuel derived substances to produce heat to melt snow). The project exists not only as a survival tool, but as an exploration of how we can shift our thinking to harness novel and more sustainable resources into the future.

At a more functional level H2 Snow represents sustainability through its ability to be disassembled. Significant time in the design process was allocated to the 'design for disassembly' methodology to ensure the vast majority of its components are either serviceable, replaceable or recyclable.

House of the Victorian Government Architect