A creative, not-for-profit project sharing messages of heart and hope across Australia.

Originally started in response to the COVID-19 Pandemic and Victoria’s second Lockdown in August 2020, this creative, not-for-profit project has evolved into a national campaign that shares positive messages for heart, hope and solidarity across the greater community. Predominately filling traditional print and digital advertising spaces with unifying messages to help lift community spirit and celebrate togetherness across state and territory borders.

We’re living through an extraordinary period of hardship and uncertainty. And in the face of ongoing negativity, I wanted to create a unifying brand and campaign with words and actions that could promote and share heart, hope and solidarity across Australia and beyond. With messages and designs that not only celebrate our unified states and territories, but also the resilience and love found in each unique local community.

The brand had to be easily recognisable and universal in its usage. And the messaging needed to be clear, inclusive and positive. 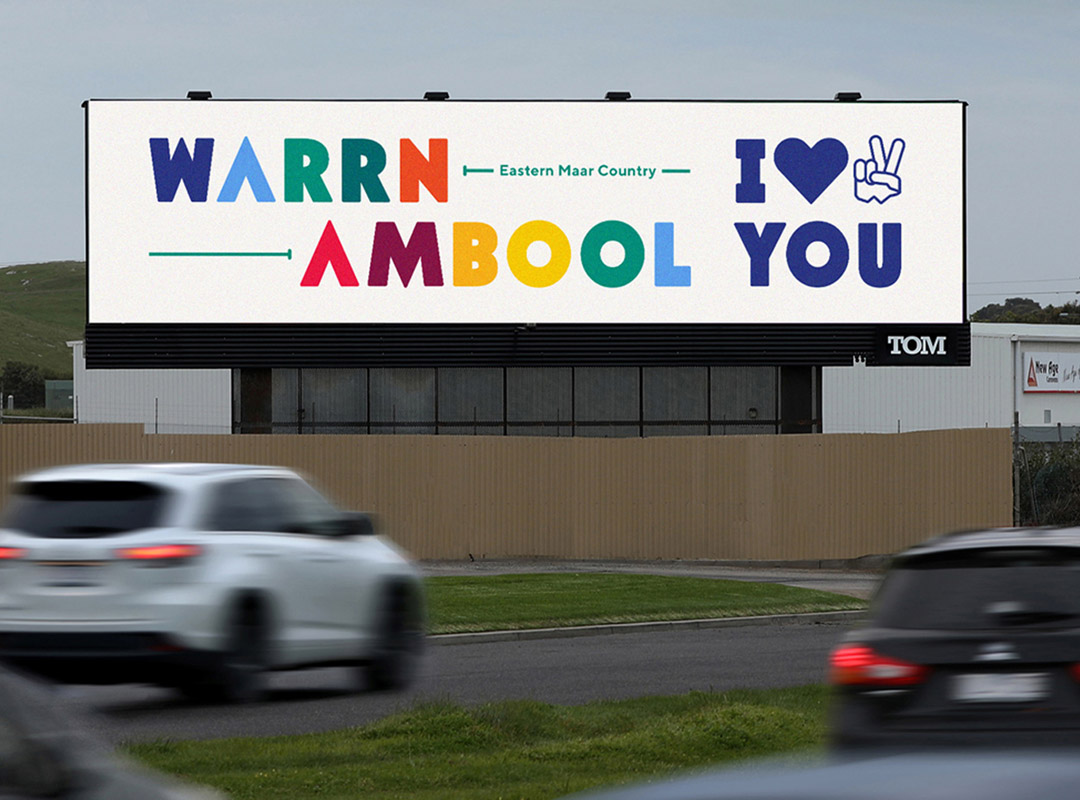 The campaign logo and name upcycles Winston Churchill’s ‘V for Victory’ and the peace sign of the 1960s, giving Australian’s a common symbol that can be proudly worn, displayed and shared to represent our united fight towards victory against COVID-19 and its greater flow-on effects within the community.

The project has since evolved to include a growing range of ‘I Heart and Hope’ poster designs (inspired by American graphic designer Milton Glaser’s iconic ‘I Love New York’) which incorporates the names of individual towns, suburbs and places celebrating the resilience, love and support found in every community, particularly during this period of ‘staying apart, together’. These posters also included the traditional place names incorporated into the design.

What started with sharing the designs on social media, the project quickly led into the real-world distribution of large format street posters printed in Melbourne and pasted in major metropolitan cities including Melbourne, Sydney, Brisbane, Gold Coast and Adelaide. As well as being mailed to a selection of participating individuals living in regional and rural areas of Victoria.

And with the generous support from out-of-home project partners, QMS Media and Total Outdoor Media, 100s of digital billboards and screens have been donated to share the campaign artwork across Melbourne and Sydney and in regional Victorian cities, including Ballarat, Geelong, Warrnambool, Wangaratta, Shepparton and Traralgon.

This project set out with a goal to demonstrate the power of what good design and good messaging can have within the community. And how far one good idea created from a kitchen table can go into making a nation wide campaign.

The project has been openly recognised and promoted by the Australian Graphic Design Association (AGDA) including an invitation to talk and exhibit at the NGV Melbourne Design Week in March 2021. Along with a second re-scheduled event called 'Design for Good'.

Whilst the project designs are very traditional in the usage of design elements and principals, it continues to proudly promote the Victorian and Australian Graphic Design industry.

Although the project has been developed with strong links to both design and world history, it demonstrates the strength and power of combining old school techniques with new world technology to promote an authentic and creative message.

The project designs have been shared, downloaded, purchased, worn, given and loved by countless members of the community. And with the inclusion of the individual town and place name designs, people living within smaller communities have been given an opportunity to freely share and promote messages of love and support for their own hometowns, whilst also being part of a national project for support and recovery from the greater flow-on effects of COVID-19.

The project itself is a testament to the community, having been completely funded by private donations, sales from merchandise and the generosity of sponsorship of a few incredible Victorian businesses. With 100% of the proceeds going back into the local economy, towards the production and distribution of sharing the messages across the state and country.

But the project still has plenty of life and potential to be used as a vessel to promote positive messages and raise further funds and awareness towards those greater flow-on effects of COVID-19 across our greater community. And with plans to develop these ideas with the government, councils, private businesses and the community moving forward.