In 2020 after the death of George Floyd, the global spotlight was again focused on issues of racial injustice, civil rights for people of colour and Aboriginal deaths in custody here in Australia.

As a designer I have often felt overwhelmed about a way in which I could use my skills to contribute to these movements. Ultimately, I created and sold a piece of print design based on the famous words of Martin Luther King, which could financially contribute and assist anti-racism movements in the US and Australia, but could also start a conversation.

This project was self initiated and had several goals. The main goal was to raise money for anti-racism charities in the US and in Australia. This should be achieved through a piece of visually engaging and meaningful design, while also aiming to show that one designer can make a contribution to the global community—even if that contribution is small.

Ultimately, this piece of design should be able to be used as a conversation piece to start a dialogue around racial and Aboriginal rights issues. 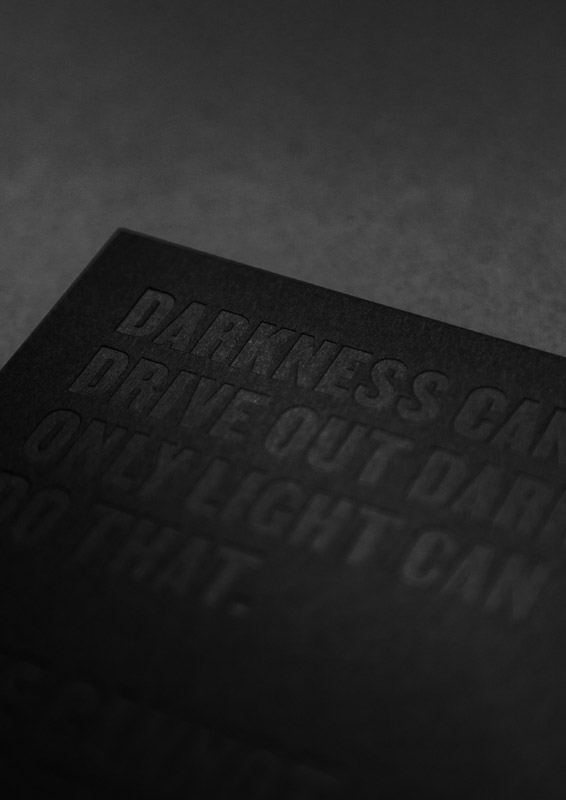 My solution was to create and sell an A5 typographic print using lines from one of Dr. Martin Luther King Jr's most famous speeches. I set the quote in the typeface Martin—designed by African American designer Tré Seals. The typeface (Martin) is based on placards from the Memphis Sanitation Strike of 1968.

It is typeset at 57pt, as it was in 1957 that Dr. King gave his original speech. Using blind letterpress on black card, in low light the print appears to be completely blank, it is only when it is lit, the message is revealed—alluding to the message of the quote itself.

The print was essentially designed to be an artwork, the aim was to create something which was not only a beautiful piece of typographic design, but would evoke an emotional response and a curiosity, using design as a vehicle to achieve that.

The print was accompanied by a small A6 printed card explaining in detail the meaning and intended outcomes of the project.

The print was essentially designed to be an artwork, the aim was to create something which was not only a beautiful piece of typographic design, but would evoke an emotional response and a curiosity, using design as a vehicle to achieve that.

I believe good design does evoke an emotional response. All the elements of the design tie back in some way to the message of the quote and the reason it exists is to remind one of the inequalities in the world and that more must be done to improve the situation.

I would say that the design has been executed and finished to the highest standard available. The content is relevant to the cause it is supporting and to the intended audience while also being an aesthetically pleasing piece of design in of itself.

While the creation of a print piece is not in of itself—new or original, I would say the use of materials and processes for this piece cleverly tie back in to the message conveyed in the piece itself, thereby making it unique.

Using blind letterpress as the method of print meant the message is impressed directly into the stock—and at times the quote can be almost invisible. If the print is in low light it appears to be void of any message at all. It is only when lighting conditions change that the quote seems to appear out of darkness.

The piece was priced strategically to be relatively affordable, while still being high enough to achieve the main goal of raising money for charity. I wanted the piece to be accessible to as broad a range of people as possible and avoid being "exclusive through pricing", the exclusivity/premium aspect of the piece was achieved by limiting the run of prints.

Prints have been sold across Australia, but also globally, with orders received from: Canada, England, France, Ireland, Scotland, Switzerland and several different States spread across the United States of America.

All profits raised from sales were donated equally between the Black Lives Matter Global Network based in the US, and Change the Record in Australia. While the project is still ongoing, it has so far raised over $1,000 for charity.

The most important part of the project in my opinion was for this piece to start a conversation, to get people to think about how their actions might impact others, or to encourage people to have discussions with others on civil rights issues themselves. That in my opinion is much more valuable.

I hope by taking these admittedly very small actions, and using my design skills, that I have in some way contributed to creating a dialogue for these issues—thereby bringing some light to the issue, and by financially contributing to those who can make a greater impact than me.