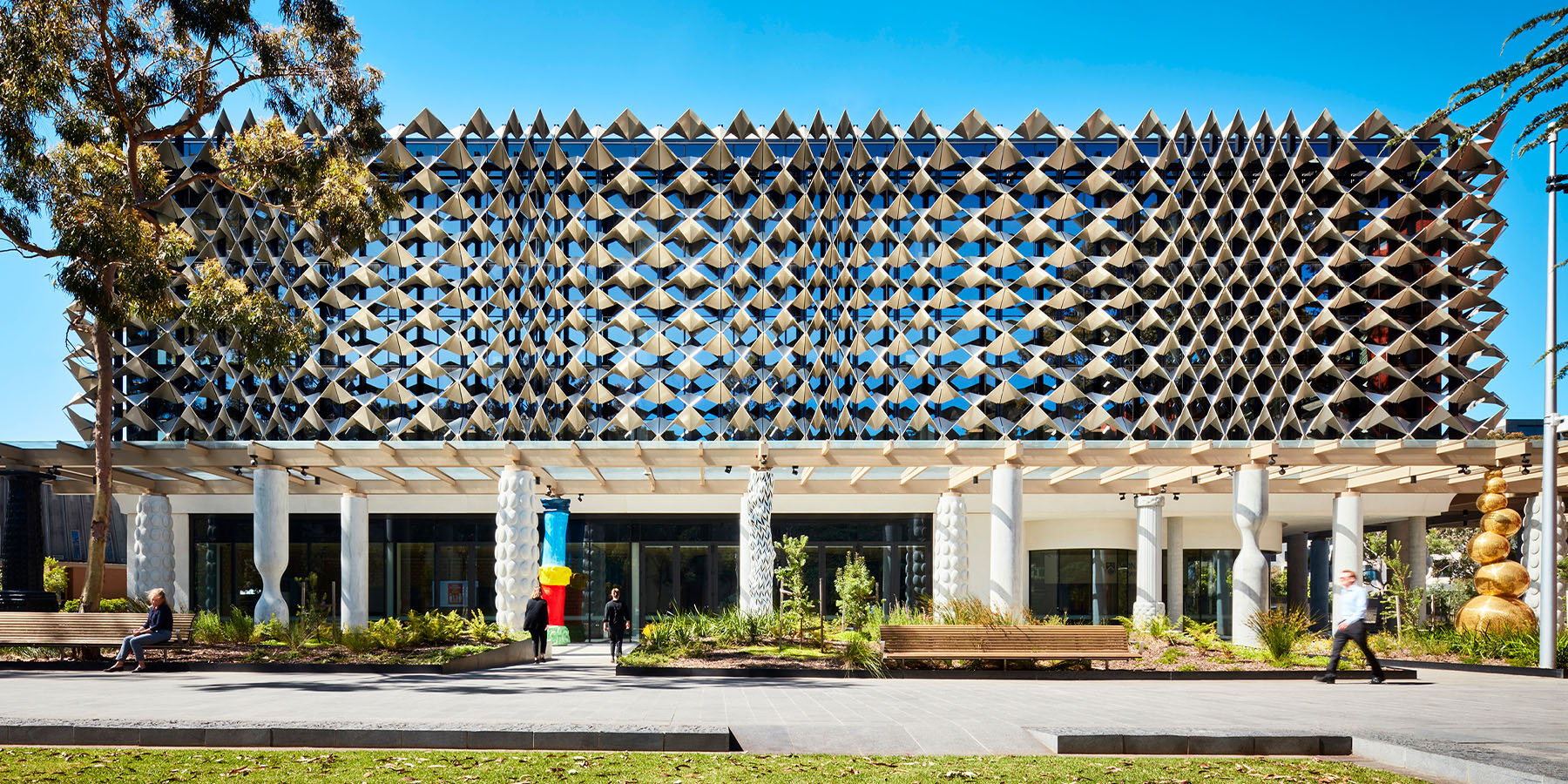 ARM’s Monash Chancellery is a ceremonial front door for the Clayton campus: an emblematic building that communicates the University’s identity.

Monash’s Chancellery is a ceremonial front door for the Clayton Campus: an emblematic building that communicates the University’s brand and identity for the 21st Century.

Driven by sustainability principles, the building is wrapped in a digitally designed screened facade. A curved timber atrium, carved from the interior, connects all floors of the light filled workplace.

An external covered walkway envelopes the building and includes art columns designed by local and international artists creating a vibrant and welcoming entry.

The Chancellery acts as a portal between Monash University and the community, celebrating the campus’s history while providing a contemporary facility.

The brief involved designing a symbol of Monash’s competitive edge in attracting the best students, academics and research.

Key to the success of the project was also balancing the highly secure, administrative needs of the University with the ambition for the building to activate and connect with it’s surrounds. We felt that a Chancellery should be a portal between the 21st-Century university and its community: part office, part town hall.

The building includes workspaces for the vice chancellor and senior executives and their staff. It is a place for senior decision makers to work and to meet distinguished visitors, academics and industry partners.

The sustainability brief was also ambitious. The Chancellery is one of Australia’s first commercial buildings to be designed to Passivhaus principles. It meets the requirements of the Monash University Eco-Accord, which are more stringent than Green Star. It also has Net Zero carbon-emission capability. 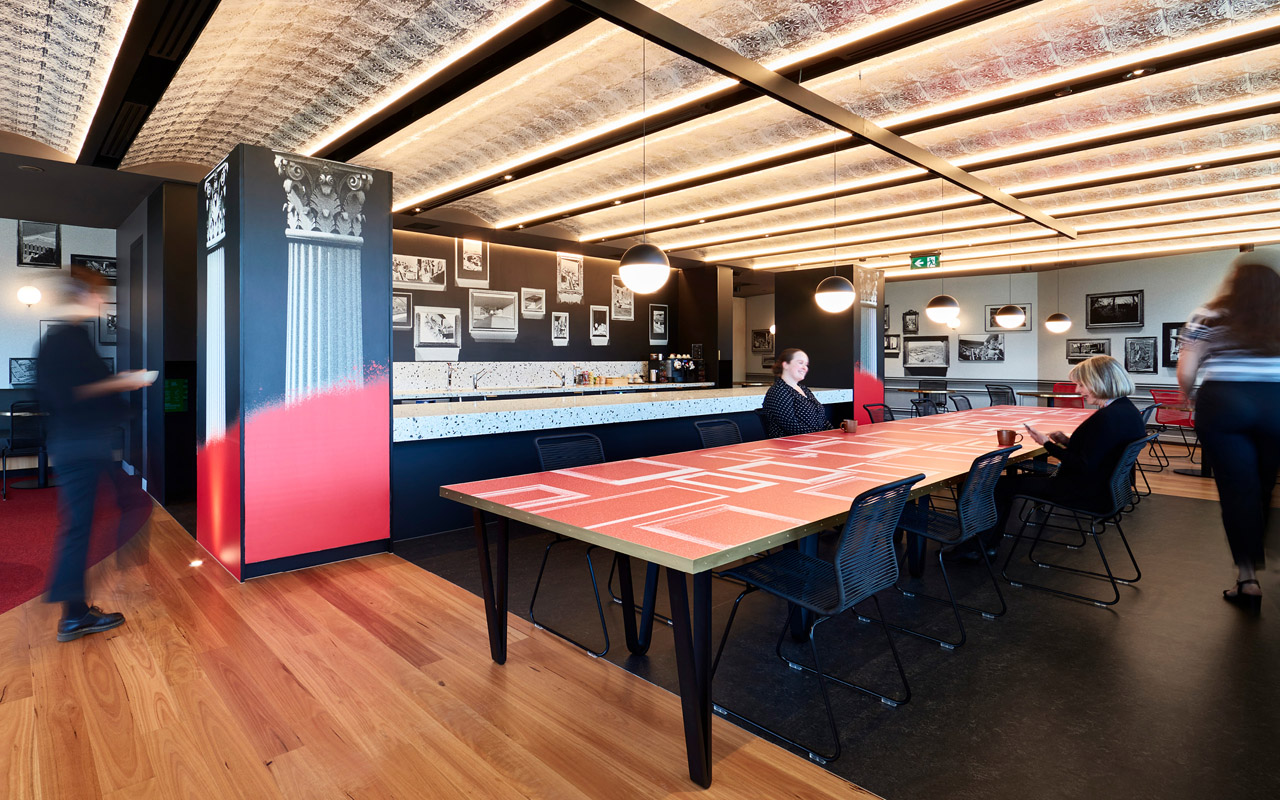 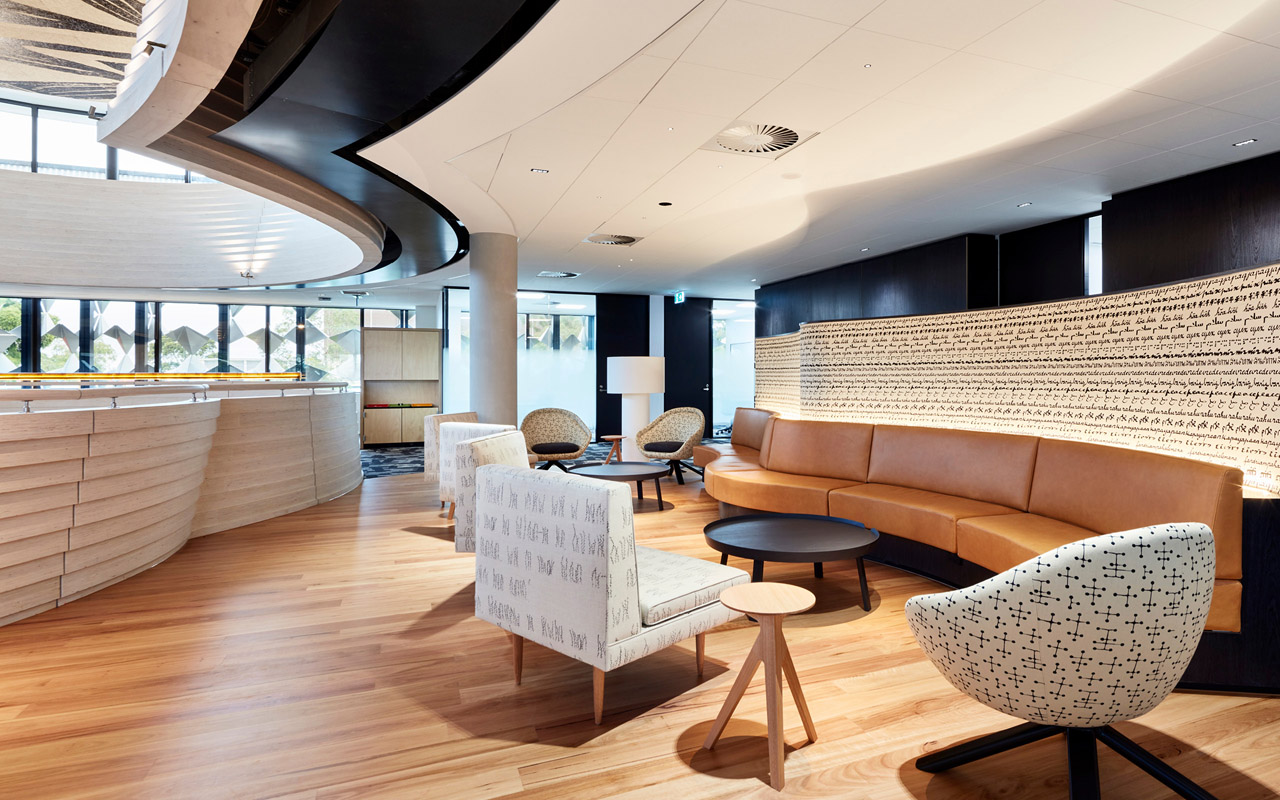 Monash’s Clayton Campus is rich in significant 20th-Century architecture. An initial masterplanning phase provided framework for the scale and placement of the Chancellery in response to the existing buildings and formal landscape.

While Passivhaus principles drove the building’s rectangular form, the design team saw this an opportunity to create an inviting artist walkway that envelopes the building and encourages interaction. The covered walkway forms a contemporary version of the traditional university cloister. It is also designed as an art walk. ARM collaborated with the Monash University Museum of Art (MUMA) to commission artists to create bespoke columns to define the Chancellery entry.

Replacing an existing building no longer fit for purpose, the new Chancellery references the mid-century shade screen, brise soleil, of the previous. The new Chancellery facade, however, reinvents this screening by fluctuating the scale across the façade in response to the building’s shading needs.

In the interior, the University’s existing workplace model was redesigned. Many of the executive staff were used to working in individual offices. The brief, however, encouraged interaction between staff to allow for cross-pollination of ideas.

We researched the staff’s real needs and balanced these with opportunities for connections. The outcome encourages staff to use the whole building, rather than sticking to their own workspace.

There are a variety of meeting spaces throughout the building alongside open workspaces and communal areas. Two large, sculptural voids are carved from the interior, connecting all levels. Acoustic treatments were carefully considered to achieve user comfort around these voids.

Above these voids, a glazed clerestory ceiling allows daylight into the whole building.

Architecturally, the Chancellery is significant, sustainable, forward thinking and representative of Monash as a diverse community.

Ambitious sustainability principles drove the form of the building resulting in the delivery of one of Australia’s first commercial buildings designed to Passivhaus principles.

The project sets a new benchmark for commercial interiors. The focal point, a large atrium linking the ground floor spaces with levels above, creates an inter-connected and dynamic place to work and meet.

The interior design reference’s the university’s history. Fragments and furniture from the original building were salvaged and reused, including tiles and green schist which now line the atrium and function space. The stairs were recast from the original staircase, acknowledging their history as the location of student protests in the 1960s and 70s.

The integration of indigenous narrative within the design is seamless. We collaborated with Aboriginal artists and craftspeople from around Australia. Manapan furniture in Arnhem Land designed custom boardroom furniture and NT artists Cornelia Tipuamantumirri and Kieren Karritpul designed fabric and upholstery items. Spacecraft Studio worked with Aboriginal artists Suzanne Atkinson and Eva Ponting, to create charcoal and imagery for artworks.

We worked with MUMA to ensure the art columns lining the external covered walkway were designed by local and international artists from diverse cultural backgrounds to reflect the values of Monash University, and there is provision to add more in the future.

ARM’s design philosophy is to create environments that embody the ideals of the organisation they serve. The Chancellery acts a fundamental symbol of the family that staff and students have joined when they started employment, enrolled, partnered, or associated with Monash.

1. Designing to Passivhaus Principles
The Chancellery is designed as a square, the ideal shape for a Passivhaus building, as it achieves the optimum ratio of volume to façade. The depth of an ideal Passivhaus floorplate however, creates problems with daylight. To address this issue, voids were carved from the centre of the building and the top-floor ceiling designed with a contemporary clerestory: a generous space with high windows, bringing natural light into the whole building.

2. Digital & Local Manufacturing Innovation
The rectangular building is wrapped with a decorative steel screen, a shading device to control heat gain, designed to Passivhaus principles. This screen advances the “brise-soleil” sun-breakers of mid-century design through the use of digital design and fabrication. Rather than the simple repetitive elements typical of mid-century brise-soleils, the geometric pattern of this screen changes and fluctuates across the surface. The craft of the screen reinforces the roots of the university as a demonstration of applied research and the skill of contemporary Australian manufacturing design – in this case, Victorian Manufacturers, Fabmetal Specialists.

The recycled wood and wool panelling on the clerestory ceiling is locally printed with an enlarged image of Australian artist Margaret Preston’s lino-cut print Tea-Tree and Hakea Petiolaris (1936).

3. Arts Industry Engagement Opportunities
The art columns lining the external covered walkway are the result of a collaboration with the Monash University Museum of Art (MUMA). The columns were designed by local and international artists from diverse cultural backgrounds to reflect the values of Monash University, and there is provision to add more in the future. These art columns – each one with its own distinct character – are tactile and colourful. The colonnade engages with its immediate context but also provides the opportunity for ongoing engagement with the local and international arts industry.

The floor plans have been designed to suit ambient conditions. A glazed clerestory atop a full-height void mean daylight permeates the whole building.

The mechanical system minimises energy consumption and allows for variations in user needs. The office layout is designed to a 1.8m grid, accommodating future floor-plan changes. Flexibility is augmented by an engineered access floor to office areas.

Material choices throughout the building are Green Star compliant and all timber is FSC certified.

2. Local/Social Responsibility
The building, both inside and out, is a showcase Australian craft and design.

The recycled wood and wool panelling on the clerestory ceiling is printed with an image of Australian artist Margaret Preston’s lino-cut print Tea-Tree and Hakea Petiolaris (1936).

The interiors include local Australian products; Kimberley sandstone, blackbutt-timber engineered flooring and Queensland plywood. All the main furniture for the function room, lounge and gathering spaces is Australian designed.

We also collaborated with Aboriginal artists and craftspeople from around Australia to commission a range of wall treatments and furniture.

The feature screening on the façade shows the skill of contemporary Victorian Manufacturers, Fabmetal Specialists.

The Chancellery is designed to Passivhaus principles. It meets the requirements of the Monash University Eco-Accord, which we have found to be more stringent than Green Star. It has Net Zero carbon-emission capability.

The roof has as many photovoltaic panels as it could fit. Instead of a diesel backup generator, there is a battery in the basement that stores solar power from the roof. The thermal plant is entirely electric. There is a rainwater harvesting tank connected to the campus’s non-potable water network. The building has a reheating kitchen only and functions will be catered for using an existing commercial kitchen on campus. There is no gas supply to the building.

The mechanical system minimises energy consumption and allows for variations in user needs. The office is designed to a 1.8m grid to accommodate future floor-plan changes. This flexibility is augmented by an engineered access floor to all office areas.

The building has a glass façade wrapped in a shading screen, or brise soleil, that controls direct sunlight onto the glass.

A key Passivhaus principle is to seal the building thoroughly to maximise airtightness. The design avoids thermal bridging. The insulated ground-floor slab has minimal thermal bridging via connections to the external walls. The brise soleil is fixed to only the parapet and the ground floor wall also to limit thermal bridging.

The ideal shape for a Passivhaus building is square because it achieves the optimum ratio of volume to façade. The Chancellery’s almost-square shape aligns with this, but created a need for central voids and skylighting to bring light into the centre of the building.

To address this, the top-floor ceiling has a contemporary clerestory: a generous space with high windows. Beneath the clerestory, we carved out two great rounded voids to let light infiltrate all floors.