A beacon to pedestrians, passers-by, and commuters.

Reservoir Station taps into the broader urban and historical context, creating a meaningful piece of Architecture which is reflective of the local population and culture. Genton’s urban-design led approach prioritised the unification of two high streets, previously bisected by the on-grade station, to create an inviting new public domain which acts as a steppingstone between the two retail precincts. The elevated station is wrapped in a floating translucent screen, inspired by Reservoir’s history as a water catchment. The iconic form shimmers in the reflected sunlight and glows from within through the night – a beacon to pedestrians, passers-by, and commuters. 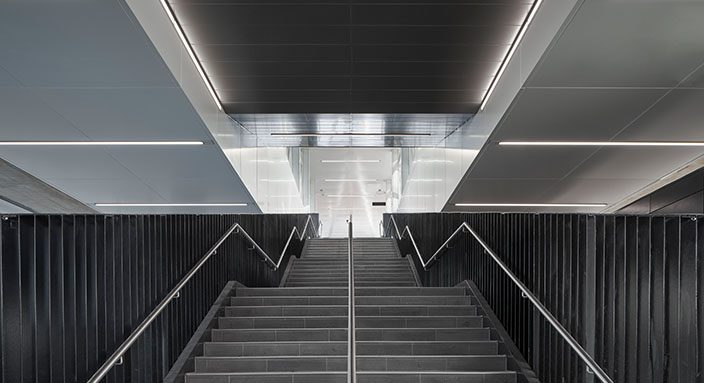 Inspired by ripples across water, the canopy floats above the new elevated station to create an arrival experience that is truly of Reservoir. Unifying the previously bisected retail precinct, the newly landscaped ground plane creates a steppingstone for commuters and those visiting the local shops, improving pedestrian connectivity while exceeding accessibility and passive surveillance best practice. Drawing further inspiration from place, sustainability principles centre around water sensitivity – including on-site rainwater storage with remote metering. Through considered design, robust and cost-effective materials are used to create a high-quality aesthetic with a meaningful connection to place.

Giving back to the people of Reservoir, the station is designed with a responsibility to the social and environmental context. Sustainability initiatives such as rainwater storage and metering, as well as using recycled glass sands within the concrete saw the project achieve a 5 Star GreenStar Design Rating. The prominent floating screen promotes civic pride, becoming an iconic centrepiece for the suburb that is uniquely ‘Reservoir’. The new central ground level public plaza unifies the retail precinct, enhancing activation and increasing commercial opportunities for the local small businesses, while also improving safe access to and through the station.

Genton’s design for Reservoir Station demonstrates the value of drawing inspiration from context, and extending the design brief to consider how transport infrastructure projects can give back to the precincts in which they are located – enhancing quality of life for local residents and increasing activation for the community and local small businesses. The urban design led approach has created a piece of Architecture and urban infrastructure that is uniquely ‘Reservoir’, inspiring civic pride and marking your arrival or departure whether by rail, car, bicycle or on foot.

Beyond streamlining and improving safety of the commuter experience, the design significantly enhances the quality and connectivity of the central Reservoir retail precinct. The previous on-grade station and surrounding complex main road intersections effectively cut-in-half Reservoir’s two high streets – Edwardes St and Broadway. Through the elevation of the rail corridor, and the creation of a new civic plaza on the ground plane, a direct visual and physical connection is created to unify the retail and community precinct, catalysing activation as well as patronage for local small businesses.