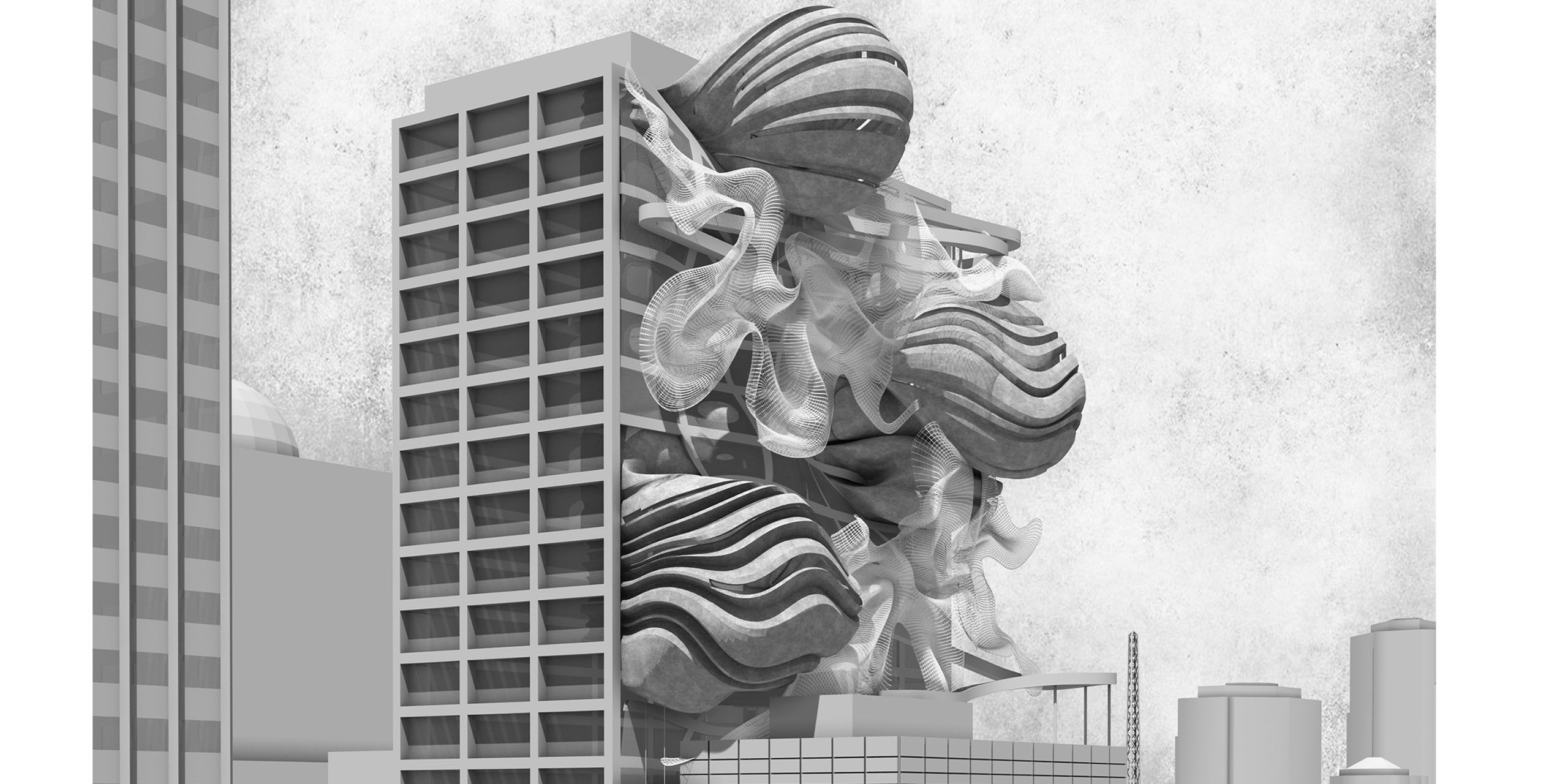 The form as a civic gesture generates curiosity and attracts people across Melbourne to experience Collins Street in a new perspective.

The extension of desire and pleasure emerges from an existing commercial tower creates a new dialogue of voyeurism and exhibitionism between the traditional office intervention and the extension, enabling opportunities of free expression. The proposal deconstructs the Collins street business district to signify the importance of a pluralist city.

When we think of Melbourne CBD we would often describe it as a space where different cultures intertwine and have the freedom to celebrate their uniqueness.

However, there are some parts of the city that don’t seem to follow the same pluralist thoughts as the rest.

They believe in the singular utopia and solution to all, which results in the heavy use of repetition. Artists like John Brack have captured moments of repetition and the loss of beauty in a metropolis. His painting Collins street, 5 pm explored the language of singularity that can be translated between architecture and people.

Collins Street has one of the most acknowledged business districts, it always had a trend of exclusivity and elitism, which have resulted in the singularity of architecture, program and demographic that traverse through the street.

My proposition aims to curate spaces that infiltrate Collins Street to break down the façade of intimidation and offer programs of pleasure as a dose of excitement.

The proposed series of spaces act as an extension of an existing commercial tower located on the corner Queens and Collins.

It recognises the existing structure and glazing as an architectural framework, then inflating within the tower creating new spatial conditions that challenges and manipulates the framework. The mesh drapes on the building, responding to the relationship between the old and the new.

It creates a third condition that exaggerates the emerging forms and offer opportunities of opening and enclosure.

I investigated garment making and designers like Issey Miyake and Mugler as precedents in parallel to my project. They understand that there needs to be a different strategy when they are treating the waist, arms and the neck.

There is a consciousness and care navigating the body as the framework, even when they are curating elaborate forms. I want to utilise that philosophy in my project by creating architecture that responds to the different existing conditions but also to reject many surrounding buildings that shares the same aesthetics.

-Breaking down Collins Street’s façade of intimidation
-Reestablishing a pluralist city
-Inspired by Art/Restoration ( The portrait of Madame X) and garment making
-Rejecting the shadow of modernism, repetition and singularity
-A new typology of curiosity and pleasure

Levity – Wake Up To Racism

The Tower of Two Cities